Trekking in the Himalayas has highs and lows By Apipar Norapoompipat

It was 7.30 in the morning. Driving through misty clouds on an unpaved road sandwiched between a plummeting mountain drop and a local Nepali village, our jeep clamored its way up from Pokhara’s peaceful lakeside to Nayapul — the starting point to the “shortest” and “easiest” trek in central Nepal. Closing in on two small boys walking hand-in-hand wearing
what could only be their school uniforms, the drowsy “awws” of endearment veered to startled laughter as the smaller of the two jumped away from the jeep, raised his little fists, and flipped the bird at all four of us inside the car. It was possibly the best wake up call ever: expect the unexpected. Things were about to get real, real fast.

Our goal was to complete the Poon Hill circuit — a four-day trek with up to five or six hours of walking per day depending on your level of fitness. The trek explores the fluctuating foothills of the stunning Annapurna mountain range, where at the Poon Hill viewpoint — 3,210 metres above sea level — trekkers get to witness incredible panoramic views of the Himalayan mountain range, namely the Annapurna I (8,091m); Annapurna South (7,219m); the unclimbable Machhapuchhre or “Fishtail” (6,993m); and the imposing Dhaulagiri

(8,172m) — the seventh highest mountain in the world. Deciding to go during April’s Songkran break, we were warned by a local friend that there was a low chance of seeing
the Himalayan range, as the end of the dry season is marked with grey and hazy skies. But as novice adventurers with a lack of time, we took the risk, flew to Kathmandu, took a death - defying six-hour bus ride to Pokhara, and there we were, ready to test our endurance for the next four days. 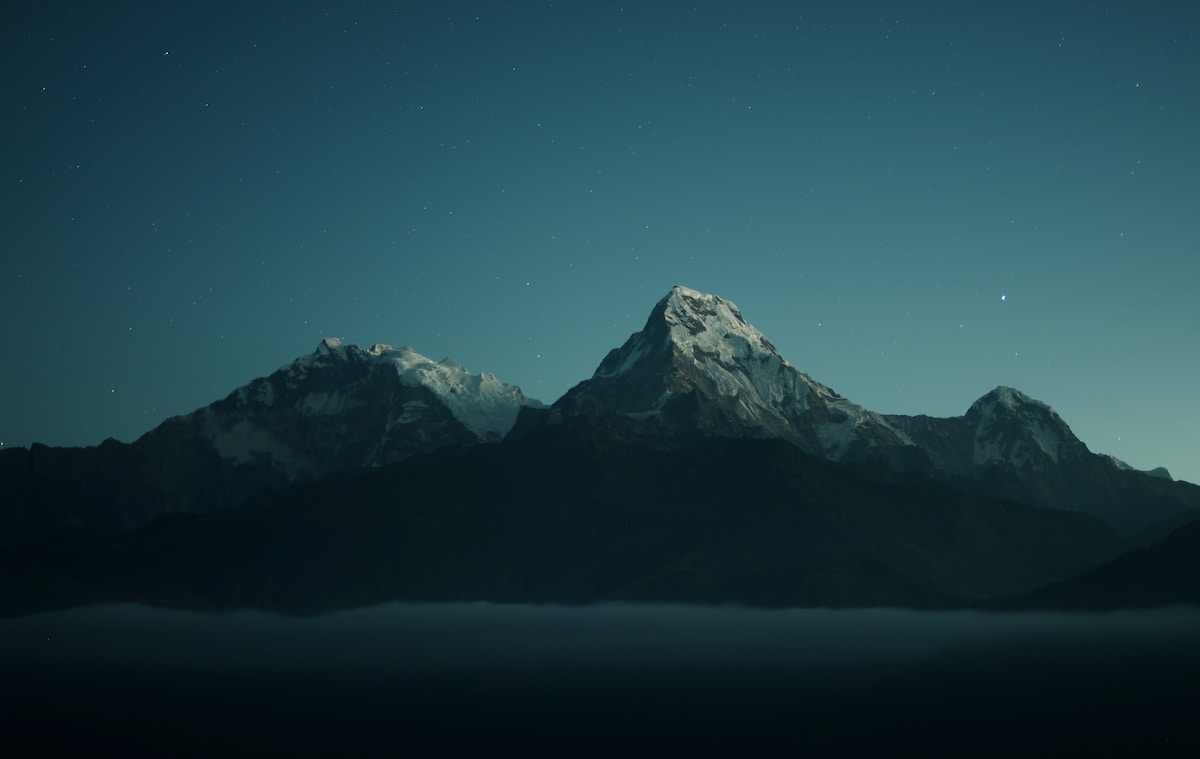 Abel, 24, was our trekking guide — introduced to us by the very same friend. Extremely mature and with years of guiding experience under his belt, we were his first ever customers to his newly established adventure company Himali Dreams. Run by him, his wife, and his younger brother Prajol, Himali Dreams focuses on off-the-beaten-path adventures which promote tourism in the most remote areas of Nepal to create sustainable jobs for locals. The people that he hires come from extremely destitute backgrounds — and with so many other tour companies taking advantage of locals, Abel’s vision and mission was most agreeable for us. We settled on a price for his services a few weeks before the
trip, and everything from thereon out was planned. For the trek, Abel hired a local porter, Sandaram, to carry our two bags weighing 7kg each. A kind, middle-aged man with a young wife and child, Sandaram was literally the backbone of the trek. On day one, we planned to walk four to five hours and gain 667 metres of elevation to the village of Tikhedhunga (1,577m). Walking on well-paved paths next to the roaring river through suspension bridges, charming villages and lush greenery, the trek — even with an hour-long lunch break — was much easier than expected. Seeing that we were still going strong, Abel pushed us forward, tackling one of the hardest parts of the trail that was supposed to be saved for the second day — the 3,000-plus steep stone steps up to Ulleri village (1,960m). Tired and breathless, by 3.30pm we reached the first of the three teahouses we would be staying in. Abel and Sandaram, who knew the trail by heart, chose the lodges with the most stunning views of the Annapurna peaks (which was sadly hard to see at times due to the haze). Run by local villagers, teahouses are bare-bone and comfortable wooden lodges — providing us only with the basic necessities like a bed, a pillow, a blanket, hot water and food. And even though the facilities are clean and the blankets are warm, most people bring their own sleeping bags or liners just in case. One room costed around 300 rupee (100 baht) a night,
while hot showers, drinking water, and WiFi (which comes on and off depending on the electricity hours) also come at small and varying prices. The food — which is mainly dal bhat (lentil stew with rice) and momos (Tibetan-style dumplings) start at around 300 rupee. Hot ginger and honey-lemon tea quickly became a staple energy boost for us. After dinner, local guides and porters would huddle together around the furnace for warmth, talking about their day. We joined in on the fun, with Abel translating for us when needed. Gathered around the furnace, we learned about the Gurkha Soldiers — an elite branch of Nepali warriors the British Army hired since World War I.

Even more unbelievable, we learned that the first car in Nepal was carried in (you
read that right) from India through the Himalayan foothills. And most humbling of all, some porters who’ve worked for almost 30 years have travelled to Poon Hill, Everest base
camp, and Annapurna base camps more than a hundred times — rendering the journey of every single tourist in the room completely trivial. As the stories came to an end, we
headed back to our rooms and passed out from exhaustion. The second day’s five-hour trek to Ghorepani village (2,750m) was technically much easier and marked a beautiful change in landscape and climate. From local farming communities, we traversed dense jungles

sprinkled with pink flower petals of rhododendron trees in full bloom. Though the thick clouds may have blocked the mountain peaks, the bright pink flowers peppered across the hills were a sight of wonder. With the out-of-this-world views and the pleasant 10 degree

weather, we reached the gates of Ghorepani village in what seemed like a matter of no
time. Thankfully as well, we made it to our teahouse before a sudden hail storm hit
the village. After a restless night of sleep, waking up at 4am, and peering outside the window, Annapurna’s snow capped peak was in clear view, illuminated by the crescent
moon. By 5am, we joined hundreds of other trekkers on the 45 minute trail up to Poon Hill (3,210m). Feeling fatigued and dehydrated from vomiting throughout the whole night (I did not eat enough fiber for digestion), the walk up was rough. My trekking partner had already raced to the top and took Abel with him to avoid the crowd, so the slow flow of the other tourists carried my feet forward. Tired, breathless, and on the brink of tears, the sounds
of cheering crowds above signalled the near-end of the climb. Turning into the last curve and gasping for air, a wave of emotion hits once seeing the towering, jagged mountains. The sun, slowly making its way up behind the clouds, illuminated the Dhaulagiri in a yellow-orange glow. A hippy, strumming his guitar and singing The Beatles’ Here
Comes The Sun added a charming touch to the magnificent scenery. All the pain was worth this view. Walking around to photographs for ourselves and others, the general chit-chat around the hill was that everyone who made it to the top that day was exceptionally lucky.
The skies were clear, the clouds came in late and we got to see the sunrise in its full glory.

We waited until the sun fully rose before making our way back down to Ghorepani.
Exhausted and not able to eat, the news that we still had to walk another six hours
(three hours uphill and three more down one hill) was quite a shock. Slowly, we
packed our bags, left Ghorepani at 8am, and made our way to our next pit stop,
Tadapani (2,630m). Walking up and down the beautiful forest, I learned that day what it meant to achieve something on mental willpower alone. I was on auto-pilot, and the only goal set in mind was the next teahouse. Abel, Sandaram and my partner thankfully were
always there to give encouragement, and seeing the local grandmas surpassing me
with 20kg on their heads wearing slippers, I couldn’t give up at this point. By the fourth day, the stomach issues subsided and with one last look at the Fishtail mountain from the Tadapani teahouse, we trekked down moss-filled forests for another three hours before catching the local bus at Ghandruk (1,950m) to our starting point, Nayapul. Sitting on a vehicle for the first time in four days, the trek was sadly over. But as many travellers we came across said, once you start, you can’t stop. We’ll be back for a harder route — fitter, stronger and definitely with more fibre supplements.

In top form: As one of the shortest and easiest treks in Nepal, around 100,000 trekkers make their way up to Poon Hill each year.

Previous
My first time in Nepal!
Next
FAQS: frequently asked questions
Return to site
All Posts
×

We just sent you an email. Please click the link in the email to confirm your subscription!